Cedric is too old for playgrounds and other stories

Last weekend started off with a couple of errands, but on the (extremely) bright side I now have a new climbing shoes and a working bank card!  It only took an entire fortnight.  I also have a working phone and French SIM card and everything, which took 6 days to activate when he originally told me six hours, so right on schedule.  This is after I cancelled the one that never came.  France and I are such great friends.

Cedric and I subsequently took a trip to the Marché aux Puces (a flea market in Paris), which ended pretty quickly because apparently flea markets close at 1pm.  Instead we decided to test the spring constants of the little spring-mounted animals in the playground we stumbled across.  The official name for this contraption is a “spring rider”, which sounds like the name for a person in a flowery motorcycle gang or a term for all the people in spandex that go cycling in the spring.  Regardless, Cedric climbs on (backwards) and the spring immediately gets crushed under his weight, so we probably should have paid attention to the clearly marked sign saying “2-8 years”.  My excuse is that it’s written in French.

We then decided to go explore Montmartre and visit Sacré Coeur, which was quite pretty, albeit incredibly crowded.  Outside, there was a very impressive shirtless guy juggling a soccer ball on a pedestal as well as a gaggle of nuns (they only come in a horde [Arrested Development, anyone?!]).  One guess as to which attracted more attention. 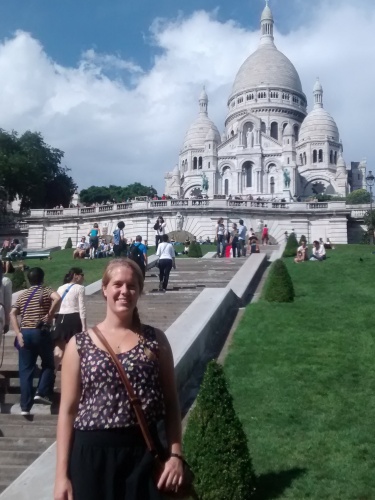 Later in the day we stumbled across a demonstration in support of Gaza in the Place de la République.  One guy had climbed the monument in the center of the square and placed a Palestinian flag on top while the rest of the group (about forty people) looked on and cheered and wore flags as capes.  There was also a lot of face paint involved in the endeavor.

I didn’t know this at the time, but the French government actually banned a series of pro-Palestinian demonstrations over the summer after some of them turned violent.  That explains all the police in riot gear milling about.  We decided they look like a cross between a football player and a baseball catcher, but still dangerous so we left pretty quickly.

On Sunday it rained so I didn’t do anything super exciting (unless you count figuring out how to do my fluids exercises while blazing through an entire season of Downtown Abbey, which I personally thought was pretty impressive).  Apparently rain is a thing here.  I sort of forgot what it was like.  Conclusion: I’ve been in Southern California too long.