Fourth time’s the curse {Chile Round 4}

Literally the worst trip I’ve ever taken. It happened back at the beginning of May and I’m still traumatized, especially after how awesome the last trip was.

It started, as many horror stories do, with food poisoning during a nine hour flight. Throwing up all night is bad in your own home, let alone 30,000 feet in the air in a tiny bathroom. Do not recommend.

This coincidentally happened to be the first trip to Chile that my boss did not join, so I was in charge of all the planning and execution of logistics for the three of us traveling. I’m also the only person in our group allowed to drive up the mountain, a combination of bureaucratic levels of safety awareness and the fact that I’ll be relocating to Chile in seven short months, so I also ended up waking up early the next day to drive myself and my two coworkers two hours from the city up to the LSST observatory after having eaten nothing for 24 hours. Again, do not recommend.

Theoretically things should have gotten better at that point, but alas, they didn’t. Out of the two crates of equipment that were supposed to be ready for us to unpack when we arrived, one was stored/hidden on a lower floor somewhere and the second one was still in Santiago. We did finally get to unpack and work on the stuff in the first crate, but the second one (with the more important equipment, of course) was literally stuck in customs for a full week and a half, i.e. the entire time we were in Chile. Meaning we never got to unpack the second crate. Meaning that once my stomach finally recovered I couldn’t even get useful work done so why even be there.

On top of those delightful experiences, I also sat in the hallway of the hostel for an hour one evening refreshing the wifi connection every ten minutes so I could stream Game of Thrones, and ate cold soup because the microwave decided not to work. It was a grand ol’ time.

The trip finally turned around over the weekend, when I went bouldering at Totoralillo Beach with a few new friends that I met at the local climbing gym.

The trip doesn’t end there, of course, because why end on a high note when you could not. The way home included an inconvenient middle seat AND a lost suitcase containing my laptop charger that didn’t get delivered to my house for two days. In retrospect, I realize that was dumb, but at least I had a good excuse to be unproductive in meetings for a few days.

But here’s a pretty picture to get me excited about the next trip happening in two weeks. Fingers crossed it’s better. I mean, it can’t possibly be worse. Right?! 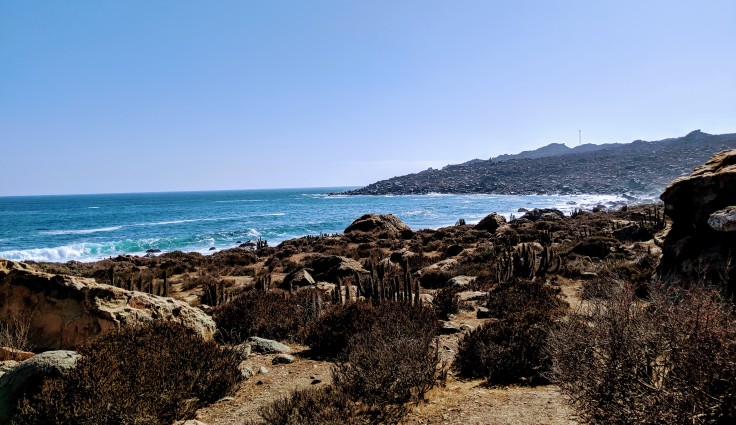